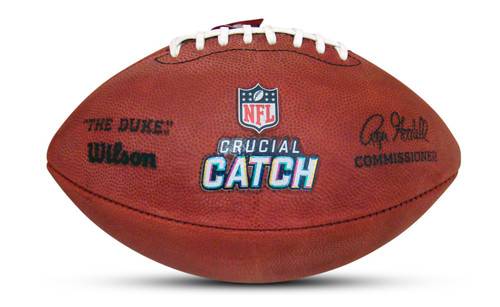 The NFL's Crucial Catch mission is to fight cancer through early detection and risk reduction. The league, its clubs, players, the NFL Player Association, and the American Cancer Society are committed to providing individuals with the tools they need to help them better understand early detection and ways to reduce their cancer risk. Each year, every NFL team raises awareness during their Crucial Catch game, which features on-field and in-stadium Crucial Catch elements. Crucial Catch games also present a special opportunity to honor cancer survivors and those currently battling cancer.

The purchase of this football helps support these efforts.

This is the official NFL Football Game Ball by Wilson.
"THE DUKE"
It is made of 100% leather and features the signature of Commissioner Roger Goodell and the NFL logo.
Great for autographs and general collecting!

Wilson NFL Official Authentic Game Ball for the 2020 Season. This NFL game ball features exclusive hand picked Wilson Leather, double laces for added texture and control and the valve panel. Wilson has been the official game ball of the NFL since 1941. Every NFL Game Ball sold in stores is inspected by hand and must pass the same specifications as those used on the field for every NFL Game. Own a piece of NFL history with your very own 100 Year Game Ball. Wilson is the official football of the NFL.