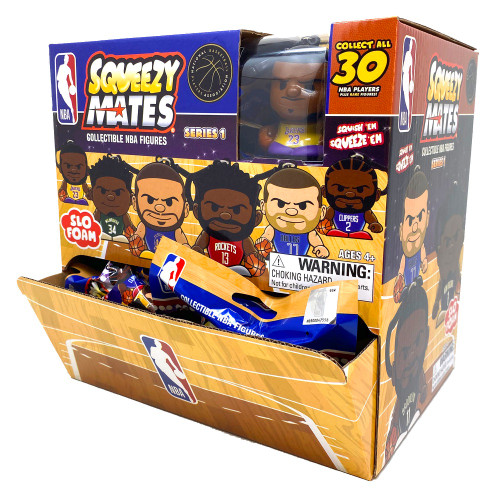 Made from the fun to squeeze material, Slo-Foam, SqueezyMates are collectible and squishy NBA player figures!

NBA SQUEEZYMATES ARE HERE AND BIGGER THAN EVER.

SERIES 1 has arrived and features NBA players and poses!

These squeezable basketball players feature all the leagues top stars. Attached carabiner clip makes it easy to clip them to a backpack, belt and more. The player figure inside each blind pack is random, which adds mystery and fun to each pack!

This is for a gravity box of 24 packs
Gravity Feed with 24 SqueezyMates Blind Packs
NBA Players Association SqueezyMates
Figure Size: 2.5" tall
One SqueezyMates NBA figure in each Blind Pack
Collect them all, each blind pack contains players which are randomly packed.
Display window on box showcases one SqueezyMates figure
Officially Licensed
Ages 4+