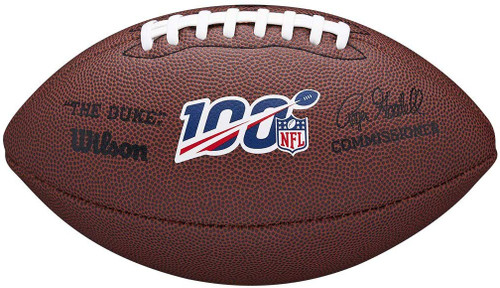 Throughout American sports history, no other brand has partnered with a league longer than Wilson and the NFL. Celebrate a century of excellence with the NFL 100 Duke Replica Football – inspired by the official ball of the 100th season, and similar in feel to the original that’s graced the field with NFL greats of past and present.

NFL100 OFFICIAL: Wilson is the official football of the NFL's 100th season, and the only official football in the league's history
PLAY LIKE THE PROS: This replica of the NFL100 Duke Football is a fun recreation of the on-field ball, so everyone can play like an NFL pro
SOFT FEEL: The composite cover makes this ball soft and accessible for players young and old
OFFICIAL SIZE: Sized to match the on-field ball, this is ideal for anyone who wants to feel like an NFL star with the ball in their hands
COLLECTIBLE: This official NFL recreational ball is perfect for collector's looking to commemorate the NFL's 100th season
PROPER INFLATION LEVEL: 11-13 PSI