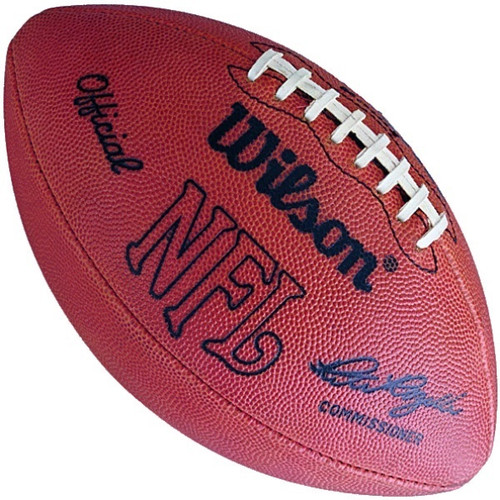 Pete Rozelle Wilson® Official NFL leather game ball is the same ball used in NFL games. It offers you professional craftsmanship with a high-quality Wilson® leather construction for top performance at the highest level. Made in the USA.

NFL Commissioner Pete Rozelle from January 1960 to November 1989
The top of the line leather game ball designed for the highest level of competitive play
Wilson has been the Official Ball of the NFL since 1941
Patented 3-ply VPU bladder made in the USA to provide the best durability and air retention
Doubled-lacing reinforces and raises the laces for enhanced grip when passing
3 layers of lining hand stitched to the football panels to allow the ball to maintain it's shape.
Ball features NFL Commissioner Pete Rozelle signature.
Designed for the serious fan or collector for individual or team autographs

Pete Rozelle was thirty-three years old when he was surprisingly named the commissioner of the NFL in January 1960. He had been the general manager of the Los Angeles Rams for only three years, and his total experience in the NFL was limited to another three years as the head of public relations for the Rams and working for the Rams while attending Compton Junior College. Rozelle came to the job of commissioner with one simple goal: make the NFL the premier professional sports league in the country, if not the world.